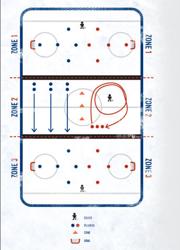 In an optimal cross-ice game plan, 8U children would spend five minutes warming up in each zone, then play a 17-minute game with a one-minute break in between sessions and then rotate through each third of the ice playing the two other opponents. The games would work like any regular hockey game, but with quick face-offs used after goals, and coaches changing lines every 90 seconds or so. The smaller ice surface means a faster pace — one that more realistically simulates high-level hockey — so kids need to make quicker decisions with the puck and lean on the skills they developed in practice.

Variants on this plan can include cross-ice games at both ends and skill stations in the middle third, as in the illustration on the left.