12U: Growth Spurts, Late Bloomers and Patience in Development

Hockey at all levels is filled with arbiters of skill who can be brutally harsh in their assessments. But for all the crusty hockey lifers who have canvassed rinks from coast to coast, the cruelest judge of talent and place on a team might be Mother Nature. The rate at which a young hockey player grows can start a chain reaction of events that last well beyond an early, eventual or never-arriving growth spurt.

Puberty plays the largest role in differentiating early stars and late bloomers. Skills and ability often don’t shake out until after a child goes through puberty that for most occurs between ages 15 and 17 – even later for others. Furthermore, most boys hit peak growth rate at age 14 while the average girl peaks at age 12 or 13.

Fast-maturing players can become early stars – sometimes leading to eternal placement on select teams while other times causing a skills plateau. Late bloomers often get overlooked, though they might also be building valuable skills while they are waiting to grow.

This size and skill gap presents itself at multiple levels and is mostly prevalent at 14U, but that doesn’t mean it doesn’t hinder things at 12U, says Joe Bonnett, a regional manager for USA Hockey’s American Development Model.

Here it is vitally important to realize that kids grow and mature at their own pace and that coaches shouldn’t be overly swayed by their development up to that point.

You see it in pretty much every youth sport at the 12U age group: There are some kids who size-wise look more like they are 9 or 10, and others who could easily pass for 15. Put them next to each other – or match them against each other – and the results are predictable.

“Here’s what’s happening,” Bonnett said. “The early maturing kid at 12U is shooting high and hard, skating faster, and they are having a lot of success at 12U at the expense of the small kid who can’t keep up.”

The first mistake a coach (or player) might make, though, is to assume those good times are going to last forever.

“The big kids are using their strength instead of finesse. But they aren’t progressing. And then once everyone catches up to the big kids, they were relying just on strength,” Bonnett said. “We want their brains and fine motor skills to keep pace with the curve. As coaches we don’t really work with those kids.”

Meanwhile, the late bloomers – if given a chance – might spend their time developing valuable traits that will serve them no matter what size they end up being. And when that growth spurts hits, they zoom right past their early bloomer peers.

“The little kid that’s on the team, the coach has to understand that kid has grit, has to persevere and wait for Mother Nature to catch up,” Bonnett said. “But they are working on their skill set. They are learning how to avoid bad situations. It’s a good thing, but they might have to wait for Mother Nature to catch up. Those who do have a chance to play at older ages, they got through growing pains and then the 12U hot shot hasn’t gotten any better.”

As a result, coaches at 12U need to work on developing every player. The late bloomer playing on the B team or the house team might be perfectly suited for that spot at the time, and working with them there could bear fruit down the road.

“If you only coach the hot shots in 12U, the program isn’t going to have a good team at 14U,” Bonnett said. “If you develop all the players in every age group, including the B team and the house team, and give them a practice to develop their skills? Then you have a chance to get a good varsity team.” 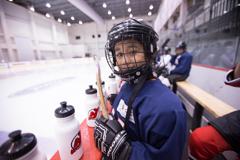