A Guide to the New College Hockey Recruiting Rules

New men’s college hockey recruiting rules have been put in place to slow down the process and improve the overall experience for youth hockey families.

Q: What are the new rules and how do they benefit the athletes and the game as a whole?

There are many benefits to these new rules, but I think reducing the anxiety that prospects can feel and allowing them the opportunity to make important decisions at the appropriate time tops the list. I also think most will agree that the very early identification of a player can have adverse effects on their development.

Q: What exactly has been the issue prior to these changes?

Mike Snee: On the surface, the issue was simply the fact that some 14- and 15-year-olds were committing to colleges. Below the surface, and I think the bigger issue, was the anxiety this was causing for other very young players that didn’t have a commitment. While there isn’t data to prove this, it certainly felt like every time a 15-year-old committed there were 50 other 15-year-olds that felt like they were being left behind.

Q: Will other leagues try to take advantage of this? Do college hockey programs have any concerns about this competition?

Mike Snee: The desire to revise the recruiting rules was to make the experience better for young aspiring hockey players and their families. How other leagues may or may not respond to these rule changes was not at the forefront of any of these conversations.

Here’s what three-time NCAA National Championship-winning head coach Scott Sandelin of the University of Minnesota Duluth had to say on the changes:

“As a coach, I’m very excited about these proposed changes. As a parent of a hockey player who went through the recruiting process, I’m even more excited. A 14- or 15-year old shouldn’t feel the pressure of deciding what college they want to attend.”

Q: Some 14- or 15-year-olds committing to college programs have since admitted they didn’t completely understand what they were getting into. Have you heard these concerns?

Mike Snee: Yes, we have heard feelings similar to that quite frequently. What is really revealing is how many young committed players and their parents were most motivated by simply being able to be an early commit and share this news with everyone, especially on social media. I like to ask the question “If you would have had to keep your commitment at 15 a secret and you couldn’t tell anyone, would you have still committed?” That question generally leads to some pause and an answer of “probably not.”

“The NHL fully supports the recruiting rule changes for men’s Division I hockey that were approved [in April] by the NCAA. We are confident that rules which support and promote college contacts later in a player’s development will reduce many of the unnecessary pressures felt by young hockey players, and will provide them better and more enjoyable experiences playing the game. These are precisely the types of changes that hockey organizations like the NCAA and the NHL pledged to pursue when we signed onto Hockey’s Declaration of Principles.”

For more information on the new recruiting rules, click here. 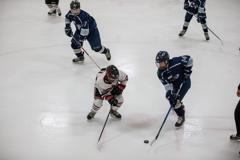