When you prioritize doing what’s best over the status quo, it’s amazing what can happen.

That’s the lesson from the success story happening with Kirkland, Washington’s Sno-King Hockey. The association has become an innovator at the 10U level, where it started a trend of half-ice hockey that spread statewide and is now being copied by other states as well.

“We took a look at it and said we should consider it because it really makes sense,” said former pro hockey player Doug Kirton, who is now Sno-King’s hockey director and a certified USA Hockey Level 5 coaching instructor.

As a model association within USA Hockey’s American Development Model, Sno-King Hockey is often at the forefront of recommendations, but Kirton says the association was doing cross-ice hockey even before it was mandated by the ADM. The 10U half-ice games started as an offshoot of that.

“We were looking at 9-year-olds and thought it’s still not age-appropriate to play full-ice. We were noticing one or two kids on the entire ice with the puck and other ones not engaged,” Kirton said. “We started to do in-house, half-ice games any time we didn’t have weekend tournaments. We saw how great it worked. Kids were on the ice a couple hours a day, the puck touches and amount of ice were crazy and we could tell the kids loved it.”

In 2016 they decided to try half-ice at 10U for the in-house rec league. A year later, the full association went 10U half-ice, and now it’s a statewide program.

“There were obviously people who weren’t thrilled about it, but we started selling the idea to people and touting the advantages of it,” Kirton said. “If you really believe in it and it’s the right thing to do with kids, you do it. It passes the tests.”

The big test: Are kids having fun and getting better?

“We have a thing called the state festival and when you watch the 10U you saw all these real hockey plays. It was very exciting to watch this festival. Kids were cycling the puck down low, goalies were making butterfly saves and players were having to one-time rebounds because they had no time and space. You saw the forwards forechecking hard,” Kirton said. “Kids figure it out. You put them in these situations and they’re making this thing happen. To me, it’s real hockey. It’s about time and space becoming limited and everyone gets better.” 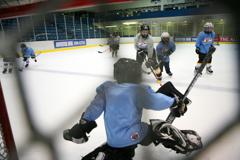 “There are still some people in our state that don’t necessarily buy in, but it’s blasted into Seattle and other parts of the state are on board,” Kirton said. “It’s one of those things that’s working because it’s the right thing.”

Others took notice and started hitting up Kirton for advice.

“Alaska was calling. Oregon was calling. Everyone had heard about it. We get calls from all over the country now,” Kirton said. “We tell everybody the truth. It’s just what we’ve experienced here. Most of them say it’s hard to get traditionalists to change, but it’s right in line with what USA Hockey is stating. It was neat and clean. 8U is cross-ice, 10U is half-ice, 12U is full-ice.”

10U teams in Washington still play full-ice at times when they play out-of-state tournaments or cross into British Columbia, but the vast majority of action is half-ice.

The only downsides are minor: Because half-ice hockey is 4-on-4, teams sometimes need to add to their rosters in order to play full-ice tournaments; and the commitment to half-ice can lead to a choppy transition at 12U, as players adapt to 100 percent full-ice hockey.

“I see our kids being very comfortable in small spaces under pressure. I guess if I was really trying to pick something out, the first couple months of 12U is kids figuring out the full ice,” Kirton said. “There’s a little bit of short-term pain, but the way the game is going position-less – free hockey, reactive hockey – it’s basically hockey concepts that are being played.”

Kids that continue to improve and have fun have a better chance of succeeding – and still playing – by the time they leave the association several years later.

“If I looked at a 10-year-old and said they’re going to be great on edges and stickhandle at a young age, that’s what I want,” Kirton said. “Did I give up a little at 12U in the beginning? Maybe – but in the long term when that player leaves at 18, are they going to be a great stickhandler and player? Did we help them during those great years of skill development? Yeah.”