Go to any 8U hockey game and you’ll find youngsters cruising around and often crashing into each other.

Don’t be alarmed: This is normal, and it is completely age-appropriate – the by-product of playing in small spaces, refining skills and learning the right ways to give and receive contact.

It’s not checking, per se, but it’s the next best thing, says Bob Mancini, a regional manager for USA Hockey’s American Development Model.

As part of the ADM, 8U hockey is played cross-ice instead of on a full sheet. There are numerous advantages, including more puck touches and greater overall involvement for more players.

“I think it’s important we recognize there are a lot of reasons why we put 8U kids in small areas,” Mancini said. “One of them is incidental body contact.”

Indeed, the smaller spaces simulate how the game is played at the highest levels of hockey – body contact included.

“When we look at the development of children it starts at a young age, and we need to make sure we’re putting them into situations that are age-appropriate for them like cross-ice hockey,” Mancini said. “The game at the highest level is played in a very small area. It’s about beating your opponent in a three-foot square area and being skilled in a small area, no time and space, being quicker than an opponent to loose pucks and win those battles. That’s one of the great things about half-ice and cross-ice, is it puts them in those situations. Contact is going to happen.” 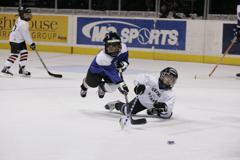 8U players need the repetitions in those small areas in order to get better and to trust that collisions with opponents aren’t dangerous – they’re just part of the game.

“People always talk about how we should be teaching 8-year-olds how to check, and in essence we are. We’re doing it by letting them play in smaller areas where the game environment is creating that body contact, which is what we want for kids that age,” Mancini said. “It’s just getting comfortable with it. The game is played in small areas. There is contact. There is a tremendous amount of possession and puck battles. It’s important to draw that correlation.”

Use All Your Senses

If your criticism of 8U cross-ice hockey is that it doesn’t look like hockey or looks sloppy because players are running into each other, Mancini has some thoughts.

“I think it looks great – it looks like 8U hockey,” Mancini said. “I think you have to be careful here. 8U looks like what hockey should look like for 8-year-olds.”

To illustrate his point further, Mancini invokes the advice of Joe Bonnett, another ADM regional manager.

“If you go to a rink and close your eyes, 8U hockey sounds just like hockey on a full sheet,” Mancini said. “And that’s a better way to describe what’s going on. There are races to pucks, battles and puckhandling. It’s not that it doesn’t look polished. It’s uncomfortable to watch because adults aren’t used to it.”

Even if you can’t get over the way 8U cross-ice hockey looks and you aren’t inclined to close your eyes and listen, rest assured that the grand plan is sound.

The small spaces, the bumping, the falling down – it’s all part of a greater good.

“Where we get in trouble is we’re so used to seeing it on a big surface, this poetry that happens on the NHL level that we are uncomfortable when we watch it,” Mancini said. “But we must return back to the fact that this is the best thing for kids at that age.”