Few people spend as much time in hockey rinks as Andy Slaggert. The Notre Dame associate head coach has spent the last 27 seasons with the Fighting Irish hockey program, and along the way, he has become a proud hockey dad to sons Graham, Landon and Carter.

If he’s not with the Irish (and Graham, a Notre Dame sophomore forward), Slaggert is watching Landon play with USA Hockey’s National Team Development Program Under-18 Team, Carter with Chicago Mission 14U, or a potential recruit at a rink elsewhere – sometimes even a combination of the two.

If it’s a recruiting trip, Slaggert’s on a mission to find potential NCAA Division I college hockey players. Whatever he’s been doing is working, as Slaggert, a Notre Dame hockey alum himself, is the lead recruiter for a team that’s made four straight appearances in the NCAA Tournament.

“He is the best recruiter for Notre Dame,” head coach Jeff Jackson said of his associate head coach. “Andy is also extremely important to our players, from the time they are introduced to Notre Dame to long after they become alumni. He is more than a hockey coach to our young men, he’s a life coach to them.”

That makes Slaggert an authority when it comes to what it takes for a player to make it to the college hockey level. Here’s his advice for 14U/16U players.

The Most Important Skill

What is the first thing Slaggert looks for?

“Well I think the first thing that’s going to jump out to anyone is skating,” Slaggert said. “I think that’s the most critical skill and that’s what you look for first, you notice first. The way the game has evolved, it’s become even more important.”

From there, Slaggert wants to see the skills that sets players apart from their peers – but in a very particular way.

“Skills, but skills within the framework of the team. We want to make sure that someone sees the ice well and makes plays and helps their teammates. It’s not just individual one-on-one beat a guy skill, but it’s those kinds of things within the framework of a team. Being able to draw players to you and dish the puck to the open man, things like that, skill but within the team framework.”

Andy Slaggert has spent the last 27 seasons with the Fighting Irish hockey program. 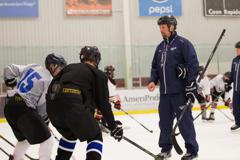 A college hockey coach like Slaggert is going to do a lot more homework on a player than just watching him at the rink, however. He likes to find out about how a particular student-athlete performs in the classroom, and not just to make sure he’s eligible to enroll in South Bend when the time comes.

“I think grades are a good filter, as far as character goes,” Slaggert said. “If someone gets good grades, they’re typically doing the right things away from the ice and that they have a good support system. That’s the first level.”

From there, Slaggert will ask around to learn more about the player he’s evaluating.

“Then leadership – are they captains? Do they do the little things? What do they do in practice? We’re going to talk to their coaches and maybe even previous coaches to find out if they are good teammates, are they well-liked, do they work hard, are they accepting of coaching, things of that nature.”

Slaggert’s experience as a hockey dad has helped shape his approach to recruiting. Graham, as mentioned, is a sophomore for the Fighting Irish, while Landon will be joining him on the Notre Dame roster next fall. Carter, still a few years out, may just follow in his brothers’ footsteps, too.

“I think it’s just helped knowing how people want to be treated in the recruiting process,” Slaggert said. “A reinforcement of how important relationships are.”

Be All You Can Be

When he returns to the Compton Family Ice Arena to give his scouting report to the rest of the Notre Dame staff, Slaggert said it’s safe to expect these questions from Coach Jackson.

“He’ll ask about how do they compete, what’s their hockey sense like? Those are two questions. How is the skating? Coach Jackson would also ask what does his coach say about him? Those are very important questions within our program.”

And finally, Slaggert wants you to know what type of player you are, and be the best version of that player you can be.

“The great thing about hockey is that to win, you need all different types of players. Be who you are to the best of your ability. Make sure you compete, and the better you do in school, the better opportunities you will have.”