12U: The Benefits of Watching Film & Virtual Training

There’s a lot to be gained from watching yourself play, particularly if you know what you should be looking for

So much is happening “virtually” that it might sound like too much to add one more screen-based activity to a routine – even for a 12-year-old who has never known a world that wasn’t inundated by technology.

However, a 12U hockey player can have fun and get better at his or her craft with a simple but effective piece of virtual training: watch an extended video of yourself playing in a game.

Sounds too easy, right? But Ken Martel, the technical director for USA Hockey’s American Development Model, says there are huge benefits if implemented in a smart way by coaches and carried out with intention by athletes.

Getting Better Through Self-Analysis

There’s a lot to be gained from watching yourself play, particularly if you know what you should be looking for, Martel says.

“If you’re with a youth team, a lot of parents have access to videotaping a game. Maybe just have kids watch a period worth of a game,” Martel said. “Have a (12U player) watch the third period of the last game and pick out two things they did really, really well. Then find something they might need to work on and maybe weren’t happy with.”

That can be followed up with a virtual meeting with a coach to discuss what the player saw.

“What that does is 1) gets kids engaged in watching the game; 2) self-analyzing their own performance,” Martel said.

A Win for Coaches

This type of video analysis is great at any time.

“As a coach I don’t even really care what they came up with. It’s about getting them to go through the process,” Martel said. “Then the next session I get a chance to sit down with the player and say what did you think – and what do you need to work on? And how do you and I come up with a plan to work on it and focus on it?”

With many of us strapped for time even though it seems like the days are endless, video work like this certainly falls under the model of work smarter, not harder for coaches.

“From a coaching standpoint I don’t have to do much work,” Martel said. “I don’t have to analyze video of 20 different kids. They do it. Then I get to build a relationship with my athletes.”

Outside of having 12U players watch themselves play, Martel recommends having them study their favorite elite players – with one caveat: Don’t just watch the highlights. Watch long sequences to see how the truly great players put themselves in position to create chances.

“You can talk to players about watching their favorite player or situation in a game,” Martel said. “Maybe I identify in myself something I don’t do well, and I’m going to watch my favorite player and see what they’re doing in that situation. You want to create some targets so that what you’re watching is more specific and letting them do the searching. Go watch those players but watch what leads up to that – not just the instant of the action.”

Whether that translates into improvement might not be known until whenever play resumes, but in the meantime it’s a meaningful way to affect change.

“A lot of times what you’ll find is that it comes back to awareness. There’s a difference between seeing that and understanding it from a standpoint where we can talk about it – and can I actually do that on the ice,” Martel said. “You’re going to have to get back to the rink to find out, but the goal is to get the kids to watch the game from not just a spectator standpoint.”

Martel is quick to note that there are plenty of ways 12U players can be staying active outside of hockey and preparing for the sport’s eventual return. Video work should supplement that.

“I think there’s been a plethora of stuff that’s been thrown up, all this content out there. What’s really important? From a physical training standpoint, there are lots of things they can do,” Martel said. “Shooting pucks in the garage isn’t going to hurt, but people are having trouble right now figuring out what should I be doing, what could I be doing and sorting it out. This is different than just shooting more pucks.” 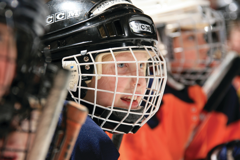