Two-time Stanley Cup champion Brooks Orpik knew he initially needed some time off when he retired from playing professional hockey in June 2019.

Orpik found the perfect balance during his first year away from the ice in the player development department with the Washington Capitals and as a volunteer assistant coach at Boston College, his alma mater.

“I remember when I retired, just knowing how I am, I wanted to take a little step back, but I didn’t want to completely do nothing the first year because I know that I would’ve driven myself crazy,” Orpik said. “That’s knowing myself and talking to other people who took a year off when they retired. But I have really enjoyed coaching and player development with Washington.”

After he retired, Orpik attended Boston College practices on an invitation “just to drop in” from his former coach Jerry York, who still heads the program. York’s current assistants Brendan Buckley and Mike Ayers are also former teammates of Orpik’s at Boston College and in high school at Thayer Academy, respectively. When former BC volunteer assistant Marty McInnis stepped away, it created an opening for Orpik.

“I tried to get [to Boston College] once a week last year,” Orpik said. “It was kind of a perfect year because I was dying to get out of the house. The full-time assistants [at Boston College] do a really good job. I just try not to step on anyone’s toes. I try to be a resource.”

Orpik is also excited to work again with York, who is in his 49th season as a Division I head coach and his 27th at Boston College. York, who is college hockey’s all-time winningest coach, led Boston College to its second-ever national championship with Orpik on his blue line as a junior defenseman in 2001.

“The thing that’s remarkable to me, is that I just kind of marvel at coach York’s energy and enthusiasm every single day,” Orpik said. “I’m half his age and I wish I had that on a daily basis. It’s contagious and the kids feed off it.”

The players also have a two-time Stanley Cup champion and Olympic silver medalist as a resource. Orpik, who grew up in Amherst, New York, played 1,035 NHL games throughout a 16-year career and won championships in Pittsburgh and Washington in 2009 and 2018, respectively. He earned the silver medal with Team USA during the 2010 Olympic Winter Games in Vancouver. 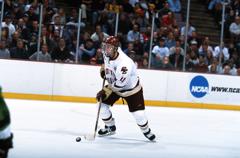 Brooks Orpik has returned to his alma mater to help develop Eagles players. (Photo from BC Athletics)

“I obviously have a little more experience than the kids, so I think they’re kind of curious about different things I’ve gone through and certain situations,” Orpik said. “I think they value the experiences that I’ve had and I know a lot of them have aspirations of playing in the NHL. I try to be as open as possible, talking to the kids about that as much as I can. It’s been fun.

The 6-foot-3, 217-pound Orpik was known for his rugged, physical, defensive-minded approach. 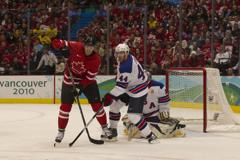 Orpik collected a silver medal with Team USA at the 2010 Olympics.

But Orpik contests the style of the game has changed at the collegiate and professional level. There has been a shift away from physical play with more of an emphasis on skill development, which falls in line with USA Hockey’s American Development Model, a nationwide standard for successfully developing American hockey players.

“I think a lot of the coaching and teaching is a lot more detailed than it was 20 years ago,” Orpik said. “The physical aspect, it’s probably a little less than it was 20 years ago, I think, but that’s just the way kids are coached. And then, these guys watch the NHL, so they try to emulate what those guys are doing. A lot of it is checking with your stick and having good body position.”

Orpik called his time on the staff at Boston College a learning experience, particularly serving alongside York and his former teammates Ayers and Buckley. Orpik is also excited to continue and balance player development with the Capitals, as their regular season is set to begin Jan. 14 at Buffalo.

“I’m more ears than I am a mouth when it comes to a lot of it,” Orpik said. “I like being around these coaches and seeing how they coach these kids because they have a lot of experience doing it. I try to help the kids out, but I’m also learning a lot from the kids and the other coaches who are there. Everyone always tells you when you’re younger that your career goes by quickly. Even playing as long as I did, it goes by extremely quickly, so that’s something I’m trying to stress to the younger guys.”