10U: Sports That Foster Hockey Skills

Many sports have skills that overlap with hockey, either on the mental or physical side

As we head into the summer and what might be considered a break for many youth hockey players from high-intensity hockey, a natural question on the minds of parents and even players might be this: Are there particular secondary sports that have skill sets readily transferable to hockey?

Perhaps that’s the best way of framing it: Are there other sports that have skills that will overlap with hockey, either on the mental or physical side? Absolutely, and particularly at the 10U level.

Martel referenced a study out of Australia that found athletes in “invasion sports” tend to excel in multiple sports of that type. Hockey fits that category, as does lacrosse and soccer – sports where you are trying to navigate into an opponent’s territory to score.

A lot of elite European born NHL players were strong soccer players growing up. NHL star John Tavares excelled in lacrosse and there seems to be something to the overlap in skills.

“What’s common? Reading a 2-on-1, how to create space, how to use my teammate,” Martel said. “Those are common in a lot of other games that kids play – that tactical ability to read a play. Even though it’s not exact, it’s good overlap. It’s certainly an area of interest for the research community.”

Conversely, Martel also notes that sports which don’t have as many obvious common links to hockey might make for important overlapping skill sets.

The theory: Different sports demand different things from players and learning a new way of seeing a game by playing a different sport can be valuable. Martel used baseball as an example.

“Hockey tends to be a real read and act sport, whereas baseball is more of a thinking game,” Martel said. “You’re in the outfield, thinking man on first, what’s my play going to be if the ball is hit to me. You’re strategizing. What’s the count? What translates there is maybe you are sitting on the bench in hockey, thinking they’re doing this, what are my options if they are running a certain forecheck?”

In addition, any sport can teach valuable lessons that cross over.

“Being a competitor,” Martel said. “Learning to just compete. Learning to deal with adversity.”

Martel notes that there is ongoing research into sports that truly do have skills that transfer. They are referred to as “donor sports,” and there’s some promising information about sports like gymnastics and parkour falling into this category.

“Research is really trying to delve into what does transfer,” Martel said. “People are trying to research this and develop around donor sports.”

The myth still persists that hockey players need to specialize and stick to just one sport at an early age. A study from the NHL should put that to rest.

“The league and players association did a survey of all players,” Martel said. “Over 98 percent of the players currently in the NHL self-reported that they were at least multi-sport through the age of 14. About 80 percent were at age 16.”

What did they get out of it? The development of overall athleticism, Martel says, plus an exposure to different environments and the need to learn how to adapt to new situations.

More important than all that, though, is the ability to get some down time away from hockey and a break from the emotion of the sport. Even if a 10-year-old says he or she loves hockey, playing other complementary sports is a good way to reset and maintain the mental energy for the season.

“If you do anything 365 days a year, it becomes difficult to do,” Martel said. “January and February rolls around and the season is long. Those players who have been going year-round, they don’t have anything left emotionally in the tank. Kids who take a break shake off the rust and come January they still have the emotional energy to continue to get good. From emotional health and well-being and being able to bring intensity to the sport, all of that goes into it.” 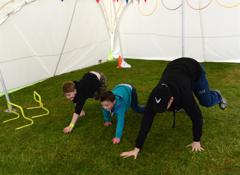