14U/16U: Commitments, Misconceptions & the Fear of Being Left Behind

In life, the exceptions get a lot of the attention while the rules get ignored.

Maybe that’s just human nature: the desire to seek out the unexpected and exceptional – to dream of being an NHL player when we grow up instead of a more mundane but solidly predictable vocation.

As such, there is a tendency to glorify young hockey players who commit to colleges at a young age. They get a lot of attention on social media in part because those players do tend to be quite skilled – but also in part because they are so rare.

What’s important to remember, says Scott Paluch – regional manager for USA Hockey’s American Development Model – is that most hockey players don’t commit to colleges until they are much older.

The exceptions might get a lot of hype, but those older players who are the “rules” provide the backbone of college hockey and often go on to succeed in the sport at a higher rate than their younger peers.

With that in mind, Paluch offers some advice to parents and young players on how to avoid getting caught up in that hype and instead continue developing and making solid decisions for the future.

Since those highly touted young players who previously committed to colleges as early as age 15 (and in rare instances 14) get a lot of attention, it’s hard for parents and peer players not to get caught up in the hype. Thankfully, the rules have changed to slow down the process, which prevents colleges from making verbal offers until August 1 prior to a prospect’s junior year (grade 11). This change was made to try and alleviate some of the pressure on both college programs, but especially young hockey players.

Nonetheless, pressure still builds in anticipation of and thereafter the new recruiting periods hit, but the fact is, it’s still not common for players to commit that early.

“The social media hype around early commitments has created a false narrative,” Paluch said. “We know and numbers bear out, players are normally committing when they are 18 or 19 and not entering school until 20 or more.”

Indeed, based on research from College Hockey Inc. conducted for the 2018-19 season, roughly 70 percent of college hockey players commit when they are 18, 19 or 20 – with the average age being just shy of 19.

“Because we care so much about our kids we want to do the best things for them so it’s difficult,” Paluch said. “Instead of getting caught up in social media blasts, the most important thing is to try and stay educated on who is committing at what age and who is truly developing.”

Easier for Teams to Make Decisions

Won’t Get Left Behind

One reason parents and other young players get antsy when a young peer commits to a college is that it feels as though that player has eclipsed others in his or her age group. It generates a “fear of being left behind,” Paluch said, but that fear is based on perception instead of reality.

In reality, as already noted, most players commit at a much older age after more fully developing and those players will have a high probability of succeeding because of that continued development before entering college.

“The reason NCAA contribution to the pro game is so strong is that they are older and more mature going into the NHL,” Paluch said. “In a sport that stresses development, college hockey is going to come at 20 and not 17. We really need to continue to put the true numbers out there.”

Do What’s Best for Development

The hard part is that seeing one of those rare players committing as soon as possible might look like success – and in some cases those players are ready for the next level at younger ages.

Parents might look at programs that have produced young college commits and think that the same path will be available to their child.

“It’s extremely difficult. There’s always a strong desire for parents to do what’s best for their kids as athletes. This goes back to the narrative of what exactly is best,” Paluch said. “Too many times we look at something and think it always could be better someplace else. We see a good team and we don’t necessarily understand the development. For players to get consideration, players are probably doing good things where they are at.”

Paluch encourages parents and players to find situations that are the right fit – which means strong development more than strong marketing.

“If a player commits from a certain team, then players want to be part of that team, but what they don’t understand is there are no secrets in our sport anymore. If a player has earned the opportunity to be recruited, he’s going to be chosen,” Paluch said. “Finding the environment to be the best player, not for what you see in a social media blast of a player committing, that’s what parents really need to focus on.” 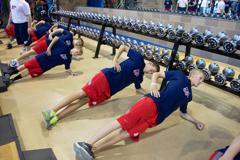