It wasn’t that long ago that Brock Faber was an up-and-comer in the USA Hockey system.

Now he’s a leader on the University of Minnesota men’s hockey team, a second-round NHL draft pick and a player both skilled and respected enough to be named a captain of the U.S. team at the 2022 World Juniors, not to mention a key blue liner for the 2022 U.S. Men’s Olympic Team.

Given all his success and his relatively young age (he just turned 20 in August), Faber seemed a natural candidate for this question: What skills and messages acquired in your years of USA Hockey prepared you for the career you now have?

Faber took time out of his busy college season to provide numerous insights into how USA Hockey and some of the main tenets of the American Development Model helped him along the way. 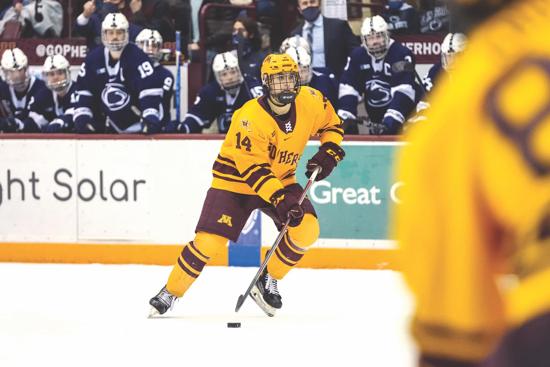 One of the main things emphasized by the ADM is that kids should play multiple sports at young ages as a way to develop overall athleticism and avoid the burnout from early specialization.

Faber is a great model for that notion. He was an excellent football and baseball player. He also dabbled in lacrosse and soccer. If there was a sport to try, Faber was into it.

“I’d say growing up the biggest thing was playing multiple sports. I thought that helped me develop into a better athlete which helped me become a better hockey player,” Faber says. “The competition aspect as you get older is important. I played with a lot of the same kids my whole life, being competitive and pushing each other in practice.”

Eventually Faber focused on hockey, but not until he was well into his teens.

“Later I realized how serious you have to take (hockey) to even get to college,” Faber says. “But I’d say growing up playing other sports was huge for my development.”

The younger levels of USA Hockey put an emphasis on development through cross-ice, half-ice and small area games to get players more puck touches and encourage appropriate proportions.

Faber says he found that work in his younger days to be “super important” in the course of his progression.

“You grow up playing small area, 2 on 2, 3 on 3,” he says. “Then players get bigger and faster and it feels like you are playing 3 on 3 in a corner. Finding little plays to make under pressure, in heavy physical games, that really helped me. That helps everyone grow. You’re playing small area games and competing as hard as you can succeed.”

It’s so important that it’s still emphasized at the University of Minnesota, the No. 1-rated program in the country.

A sometimes underrated aspect of becoming a great player is being a leader and an excellent teammate. Some of those traits can seem like they are innate, but they can also be taught and learned.

Faber says those skills were nurtured as he made his way up through the levels of USA Hockey.

“I had great coaches growing up. I think the number one thing was not caring about your personal stats or personal achievements. Something like that, being an unselfish teammate, goes a long way,” he says. “That’s allowed me to be a leader on teams I’ve played. How much I care about the team and less about myself. Focus on doing everything you can for the team instead of your own numbers.”

Above all else, though, USA Hockey stresses that the key to development is having fun and enjoying the sport.

When Faber was asked about some of his favorite memories growing up playing youth hockey in Minnesota. Initially, he said there were too many to count – a good sign – but eventually he settled one that was more specific.

“My Bantam AA second year in Maple Grove (Minn.), we won the state championship. That was probably the best memory,” Faber says. “We were a team that was always so successful in Squirts and Peewees, but Bantams is a whole new level. The whole team came up all the way from Squirts and we all grew and learned.”