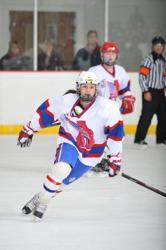 Thinking about skipping a level of development to try and accelerate your hockey career? Think again. Trying to take the fast track at any age will hurt a hockey player rather than help them.

It’s a societal issue that’s not just specific to the game of hockey, but former Michigan Tech assistant and current Green Bay Gamblers associate head coach Pat Mikesch has seen it happen too often in this game.

That “elite” player Mikesch is talking about is extremely rare. There’s no logic to making a jump when the player hasn’t yet been a dominate player at their current level.

A common misperception is that if you jump up to the next level, even if you’re not ready, that development will also accelerate. That couldn’t be further from the truth. In fact, it will most likely hinder development in a variety of ways.

Kids are going to lose confidence if they’re playing against bigger and stronger kids that they’re physically not mature enough to play against yet. They’ll receive less ice time and less responsibility, all of which limits the opportunity to improve.

“I think 90 percent of it is confidence,” says Mikesch a Hancock, Mich., native and former star player at Michigan Tech. “If you’re not confident to make plays and to play at full speed at that higher level, it’s detrimental.”

One example of a kid staying back and having success before moving up is Park Ridge, Ill., native Ryan Wagner. Wagner played an extra year of 16U Midget last season with the Chicago Mission, where he ended up helping the team to a national championship. This May, he committed to play college hockey at the University of Wisconsin. This summer, he was the captain of the U.S. U18 Select Team at the Ivan Hlinka Tournament and was asked to join USA Hockey’s National Team Development Program.

“That’s the type of year he had in terms of development, just by staying back and making sure that he was playing in a situation where he was going to have a lot of success,” says Mikesch. “There’s no reason for the rush to be taking place. I say it over and over to kids: Make sure you’re successful where you’re at before you’re worried about taking the next step.”

Especially in hockey, late bloomers are commonplace. Focus on development, not rising through the ranks.

“There are so many late-blooming 19- and 20-year-olds and our goalies seem to be developing even later,” says Mikesch. “It’s too often the parents are worried about what team they’re on as a 16-year-old rather than what kind of development they’re getting as a 16-year-old.”

Another prime example of a late bloomer is Danny DeKeyser. The defenseman took it one step at a time to the point where he’s now playing a regular shift for the Detroit Red Wings. DeKeyser played Midget Major hockey all the way through 18U. He couldn’t find a spot in the United States Hockey League, so he ended up playing Tier 2 junior hockey for one year before joining Sioux City of the USHL the following season.

He was still fairly unknown before Western Michigan offered him a roster spot. He excelled at Western Michigan before being signed last year as an undrafted free agent by his hometown squad, the Detroit Red Wings.

“It was just one step at a time for him, rather than trying to skip a step in the process where he might have failed and then never made it to where he’s at today,” says Mikesch. “That’s what we see too often. A kid comes in and gets rushed into a situation where they fail, and then they don’t get another chance when they’re actually ready for that opportunity.”

At all levels of USA Hockey’s American Development Model, there is a focus on skill development. For boys aged 12-16 and girls aged 11-15, this is the Training to Train stage. It is still a critical a developmental stage. To not be able to use your skills in all situations is anti-development, so sitting on the bench or seeing minimal minutes at a higher level of play is not good.

Just because your child is not one of the top two or three players in the country doesn’t mean they will be left behind. This is still a time to improve – and every player has their own pace.

Don’t rush it. Enjoy the process and remember to have fun.

“There’s enough hockey for everyone to have opportunities – when they get there,” says Mikesch. “Whether they make it to the USHL as a 16-year-old or a 19-year-old doesn’t determine anything. It’s making the right step at the right time and then putting yourself into a situation to be successful moving on from that level.”