Leading talent developers in the hockey world and the golf world share more than a fondness for booming slap shots and long drives. As it turns out, there’s also the shared study of Istvan Balyi’s long-term athlete development principles.

USA Hockey incorporates them into its American Development Model and Dr. Greg Rose uses them at the Titleist Performance Institute.

A board-certified doctor who also holds an engineering degree, Rose works with golfers around the world, including PGA and LPGA Tour players, to hone their game as part of TPI, which ranks as one of the world’s elite education-and-research organizations for golf mechanics and player development. 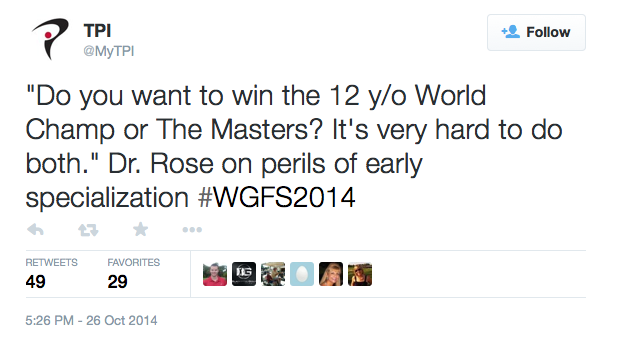 The parallels with youth hockey are intriguing. Research shows that early specialization limits development of overall athleticism and potential while increasing injury and burnout rates, but despite all that, some still chase the 12U championship like it’s hockey’s holy grail.

We spoke with Rose and asked him to elaborate on his tweet and how to avoid short-circuiting a child’s athletic development.

“As parents, or coaches, you’ve got to make a decision,” he said. “Of all the U.S. Kids World Golf Championships winners, only two have won on the professional golf tour. The vast majority of the time, it’s early ripe, early rot. But players that ultimately win on tour don’t fall into that trap.”

Applying it to hockey, Rose said, “if you want to get to the highest possible level, there are developmental things we need to attack in the youth ranks that might slow you down a bit now, but will ultimately help you win a Stanley Cup.”

It’s that long-term approach and a commitment to developing the total athlete that unlocks their full potential. And, according to Rose, if it’s done right, there’s no need to sacrifice the present for the future.

“If more coaches understood the development mindset, we could do both,” he said.