Purpose: To have continuous flow among players while executing passing, receiving and shooting skills.

Drill Structure: Start in a corner, using a sixth of the ice. Have two groups of players ready with pucks. Place a cone on the dot in the center of the circle. Drill starts with X1 passing to oncoming F1. F1 then touch-passes back to X1. Once X1 receives this pass, he/she is activated and directly attacks the net 2v0 with F1. F1 skates around the cone and gets in position to receive pass or attack rebound from X1. After a play on goal is made, X1 repeats the drill by circling back around the cone and receiving a pass from X2. F1 moves out of the drill.

Coaching Points: Let the drill unfold. There should be great tempo. Teach players to position themselves to receive passes either off the rush or when regrouping with the next person in line. Teach "presentation" (the ability to demand the puck with physical readiness and stick on the ice providing a good target).

Equipment: Pucks, one cone, one goal. 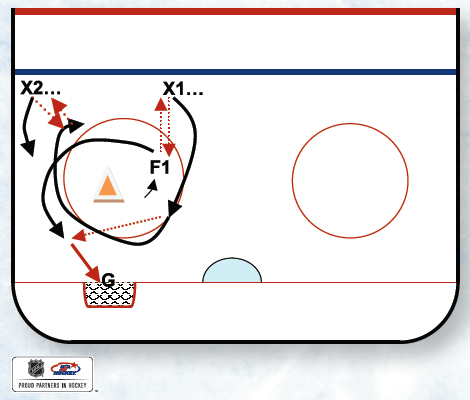