Purpose: This drill works on basic puck-control skills with a twist -- it forces players to move their body around the puck. The mechanics of this drill also emphasize ready positioning by keeping the puck in an immediate passing or shooting position.

Drill Mechanics: The player carries the puck around the tires, keeping the puck on the forehand the entire time. The puck is not allowed to touch the backhand side of the stick blade. The player finishes the drill with a shot on goal.

Comments: This drill helps players learn to control the puck more effectively in shooting and passing situations. Keep the number of players involved to six or fewer so that the repetitions remain high. While this drill is very basic in its setup, it can be valuable (and challenging) for older age players as well. 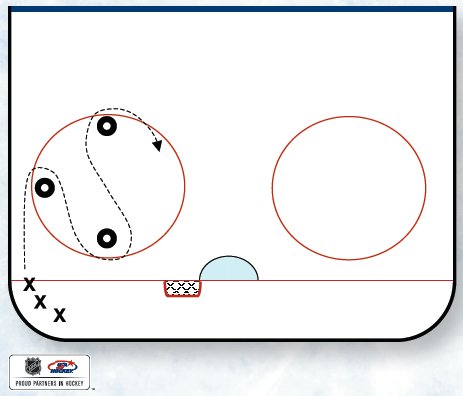