Drill Mechanics: The coach spots a puck to either side of the ice. The first player in line on the puck side is on offense and the first player on the side away from the puck becomes the defender. The offensive player retrieves the puck and attacks the opposite goal. The defender must skate around the cone on his or her side of the ice, establish a middle-ice position on the puck carrier and then angle the offensive player to the wall playing the 1v1 situation. As the defender moves from the middle, he or she should keep the stick toward the inside, providing an added obstruction to help deny the
middle ice from the opponent. As he or she closes on the offensive player, stick-on-puck becomes important to deny a shot (or a potential pass).

Coaching Points: Taking away the middle and forcing the opponent wide is an important concept in learning to forecheck. Good body position and timing is paramount. The defender must not be too far ahead or behind the opponent. Stick positioning becomes the added detail that helps players deny passing and shooting lanes for the offensive player.

Comments: At first, this can be a difficult drill for 12U players. It will take several sessions for them to get a sense of proper body positioning and timing, but stick with it, because it develops an essential skill that players will use constantly, all over the ice. It will also allow them to prepare for full body-checking as they move to 14U in the future. 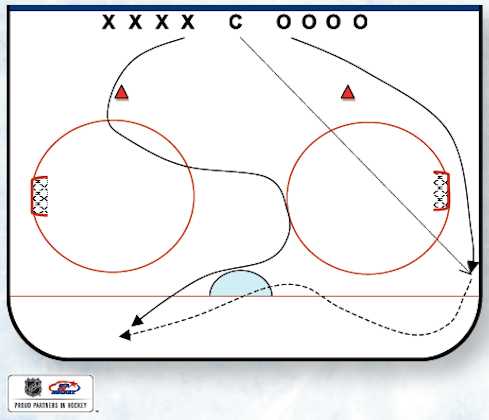