12U Attack and Backcheck

Purpose: To create high tempo in attacking the offensive net, then transition from offense (attack) to defense (backcheck) in a high-tempo situation.

Drill Structure: Four lines of players in two groups of Os and two groups of Xs. Have pucks in designated lines only (one O line and one X line). On whistle, two Os attack the opposing goal 2v0. After this attack is over, e.g., goal is scored, goalie freezes the puck or rebound is to be played, coach blows whistle (coach’s option). On this
whistle, two things happen:

Coaching Points: Both players in line must be ready (one player with puck) to explode on offense. A head-man pass works well. Offensive attackers must read the pressure. If there is no pass option, encourage player to shoot to score or shoot off the goalie’s pad for a rebound. Offensive players must stop on the net (players cannot “fly by” the net because they’ll lose the backcheck opportunity). Encourage backcheckers to fill the mid-lane and get sticks on the ice. Backcheckers will break up many lazy passes in this drill, which should transition quickly. Encourage second chances and brief net-front battles if there are rebounds on the initial shot.

Comments: Emphasize two-way play. Teach and encourage effort on both sides of the puck. 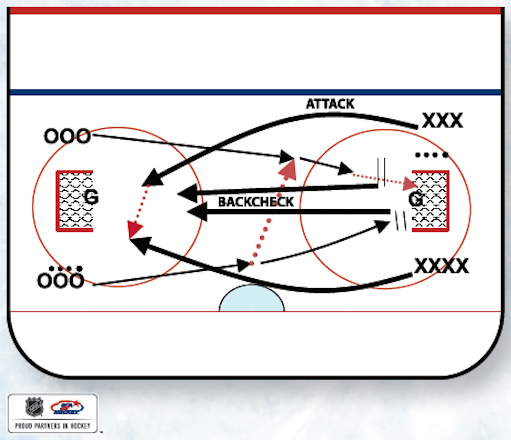