Purpose: Introduce offensive zone play and teach players to move without the puck to create proper puck support in the offensive zone. The drill creates 2v1 attack situations out of the corner, teaching both the attacking role and understanding of 2v1 defense in front of the net.

Drill Execution: Have lines of players in both corners with pucks. Begin drill with X-scissors player in the slot without puck and a defender in front of the net. Drill starts when X-scissors player skates up and around cone toward X1. Scissor player should stay to the outside or near the wall. X1 skates toward X-scissor on the inside and creates an exchange or drop pass, then loops around cone. X1 and X-scissor then attack the defender 2v1. Once the offensive thrust is over, X1 becomes the scissor and the drill repeats on the other side of the ice. Scissor then becomes defender. Previous defender joins a line in the corner. This is a continuous drill.

Coaching Points: Emphasize speed of attack and a quality exchange. Try to exchange the puck toward the safety of the wall instead of open ice in the middle. Emphasize strong, decisive attacks 2v1 to the net. NOTE: This drill can be performed in a smaller space as well.

Comments: This is a great introductory drill to teach the concept of puck support. This drill forces the player away from the puck to move toward his or her teammate and support in the offensive zone. 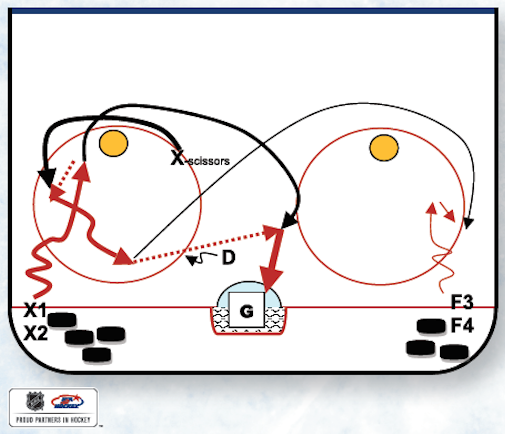