Procedure: Start with X1 in front of the net. On the whistle, X1 skates away from the corner, tracing the outside edge of the circle. At the same time, X2 skates up the wall with the puck and passes laterally across the circle to X1. After X2 passes puck to X1, X2 continues up ice and gets to a support position outside of the blue line. Once X1 receives the pass, X1 skates out of zone, and well before exiting, makes a pass to D1. D1 one-touches the puck to D2. D2 one-touches the puck to X2, who is posted on the wall, outside the blue line.
X1 must time his or her loop outside the zone to stay on-side and receive a pass from X2. X1 then attacks the net. X2 follows X1 to net and repeats the drill.

Coaching Points: Quality passes will make this drill much easier, so emphasize concentration and making a good pass. Timing and execution go hand in hand. This is an introduction drill for flow and continuous timing drills.

Comments: This is also a scoring drill. Have the shooter stop at the net front and add a screen element. Progression can also be a 2-on-1. Have X2 join the rush to create a 2v1 against X3 who gaps up. X3 then repeats the drill after his or her rush defense. 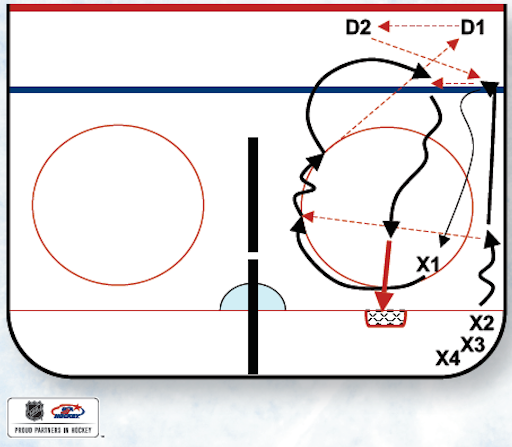