Purpose: To enhance speed and stride length by using proper speed-building methods involving change of direction, brain response and an 8- to 10-second window.

Drill Structure: Very simple setup. All you need is a stopwatch, four cones and some distance markers (small cones or ringette rings work well). Stagger four cones at start of drill. When coach is ready with stopwatch, the player begins the drill on his or her own. Coach starts watch on player’s movement. Player weaves around cones and sprints down the sheet. Once the clock reaches 8 seconds (or 10 seconds for younger players), coach blows a light whistle and player slows down (but doesn’t stop immediately) and then returns to starting line at a comfortable speed. Coach should mark the distance covered at the 8-second mark (or 10-second mark) by placing a ringette ring or a mark along the boards. Coach should mark two or three players, giving all the players a goal to beat. This drill ultimately identifies the fastest player of the group.

Coach should use 8 seconds with 12U players (so they avoid closing on the end wall) and 10 seconds with 8U players. The 8 to 10 seconds parallels the ability of an 8- to 12-year-old player to achieve maximum exertion before the body and skating technique breaks down.

Comments: Building speed in prepubescent players is important, but because these players are not fully physically mature, they aren’t capable of skating entire lengths or laps with good technique. As a
result, it’s important to stimulate the brain (change of direction weaving) and encourage full exertion (sprint) for the proper amount of time. Keep this a fun drill and it’ll pay dividends.

Players love competing against themselves and their teammates in this drill. 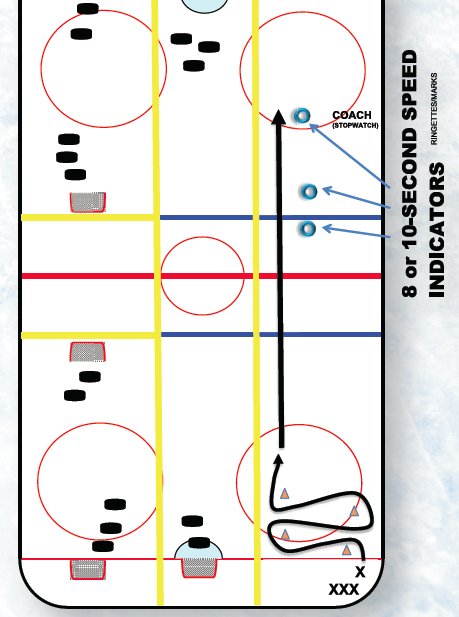