Purpose: To create an environment where players are forced to join an
active live play while thinking and reading the play. This drill develops
instincts and hockey sense. It also allows the coach to see which players quickly read the action and assume the correct supporting role (either offense or defense).

Drill Structure: Set up two nets cross-ice. Use black foam dividers to create a lane from the center red line to the blue line. Drill begins with live 1v1. Once play is established, coach taps stick to signal two additional players. On the coach’s stick tap, they jump the barrier, tag the blue line, sprint to the center red line, then sprint into the zone. When these players enter the zone, they must read the play and assume the correct roles.

Encourage verbal communication. Once 2v2 is established, coach taps stick again to signal X3 and O3 to join the drill.

Coaching Points: Purely role recognition. Players must understand that
help, either offensively or defensively, will be on the way. Players need
to recognize situations and ultimately help or use teammates wisely.
Teach the puck carrier to attack or wait for offensive help. Teach incoming defensive player(s) where the highest-threat areas are on the ice and how they can effectively enter the zone to add an additional layer to the defense.

Teach players that the sooner they support the puck, the better chance
their team has to win the offensive or defensive situation. This drill is great to teach roles away from the puck. Watch your players to see how fast they can change roles between offensive and defensive responsibilities. 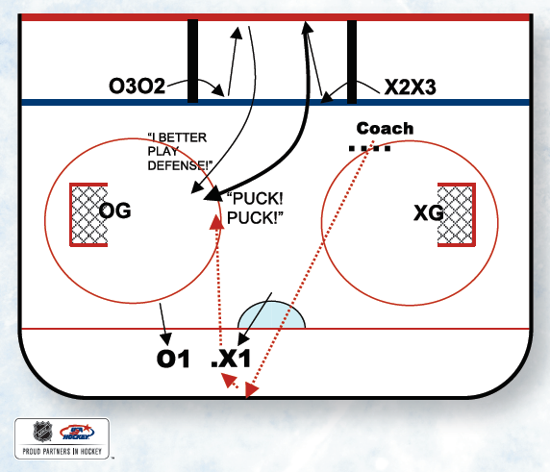