For a parent of a new hockey player, entry into the sport can be an intimidating experience. And that feeling can start long before the first goal or even first skate blade hits the ice.

That’s because outfitting your youngster – 6U, 8U, whatever age they might be starting – requires equipment that’s specific to hockey. A basketball parent buys a pair of shoes and a ball, while a hockey parent is looking for head-to-toe gear.

Fortunately, Scott Aldrich – USA Hockey’s manager of hockey operations and longtime equipment man – is here to provide some tips and demystify the process.

Foremost on the minds of parents is making sure their kids stay safe on the ice. To that end, there are a few things in particular to pay attention to when it comes to equipment:

Outfitting your child safely while also trying to work several pieces of brand-new equipment into your budget can be tricky, particularly for young players who are growing – and outgrowing their gear – at a rapid rate. But there’s good news: beginning players can almost always perform well, and sometimes even better, in used equipment. Just make sure it’s in good shape so the protection isn’t compromised.

When asked if used skates are a viable option for parents on a budget, Aldrich said, “There certainly are places out there that offer used skates and it’s a good option – one that can definitely be utilized.”

One advantage of used skates is that they are usually more pliable, allowing a greater degree of initial comfort and ankle flexion.

Likewise, other pieces of equipment, like hockey pants, shoulder pads and shin pads are candidates to be found second-hand – again and again, as other parents just like you trade up for new sizes. Many youth hockey programs have used equipment exchange programs or surplus gear. Don’t hesitate to ask if you’re in need of something.

“If you do your homework and your due diligence in shopping, you can find slightly used anything,” Aldrich said.

Ultimately, the prohibitive expense of hockey equipment, especially at the younger ages, is a bit of a misconception. While it’s possible to spend heaps of money, it’s far from essential. Quality used gear is widely available and it won’t hurt your youngster’s chances of becoming a great hockey player.

One piece of equipment that might seem pretty obvious is the stick. How hard can it be, right?

Well, actually it’s one of the tougher things to buy – or at least buy properly.

“It’s another area where if you’re a parent not familiar with the game, it can be tough,” Aldrich said.

The first choice is the blade curvature. For the youngest beginners, a straight-blade stick (no curve) is best. If you’re past that stage and shopping for a curved stick, you need to know if your child shoots righty or lefty, but there’s a nuance in hockey. Ideally, a player’s top hand on the stick should be their dominant hand. For natural righties, that means their right hand should be the top hand – and that means they shoot left in hockey parlance, necessitating a lefty curve. But that’s the opposite of how they might swing a baseball bat or a golf club, so they could already be more comfortable playing hockey with their non-dominant hand high on the stick if they’ve already been swinging with the left shoulder leading. At that point, it’s likely best to simply let them continue with whatever is most comfortable and purchase their hockey stick accordingly.

Beyond the curvature, there’s also the matter of stick length. Off-the-rack hockey sticks should be cut to fit the player’s height. Too long and they’ll be unable to shoot or stickhandle properly. Too short and it’ll impair their skating posture and puck control. As a general guideline, cutting the stick so it stops at the chin of a player in socks and shoes (or the top of the collarbone of a player in skates) is ideal.

According to the experts, a good rule of thumb is that the flex of a player’s stick should be less than half of their body weight. And if the stick is cut down (to a shorter length), that increases the flex rating, so that should be taken into consideration.

So, for example, if your 8-year-old is 60 pounds, a stick flex in the 20-25 range would be ideal, especially if you’re cutting the stick down.

And when it comes to stick shopping, it’s not a bad idea to start out with a base-model stick until you figure out just how serious your child is about the sport. Beginning players, with their light weights and limited muscular development, really can’t take advantage of the selling points in high-end sticks anyway.

“It becomes a cost thing, especially if you have a beginning youth player,” Aldrich said. “They do make a high-end youth stick, but there are lower-cost options, especially for a beginner, that will perform fine. The stick doesn’t make the player.”

Decision-making should be governed by wise, honest information. Aldrich emphasizes that parents should arm themselves with plenty of information – regardless of how much they think they already know. They should also be willing to consult with experts who will ultimately help get their kids ready for the ice. That could mean things like going to a hockey store for a proper skate fitting. That could also mean comparison-shopping online for prices, but making sure to try gear on before committing to it.

“I would strongly encourage parents to be present unless you have some knowledge of the equipment,” Aldrich says. “These stores have become pretty good at fitting. For me, working with higher-end players here at USA Hockey, I always like to see things fit. That’s an important aspect overall – as well as the cost. You have to look at your own budget and your own situation. There are always options." 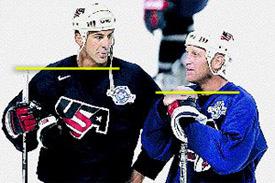