Purpose: To create a live-action situation for your team. This drill encourages players to battle for loose pucks and activate the defense to create a 4v2. It also works on power-play and puck-possession skills, and eventually, zone entry concepts.

Drill Structure: Put both nets between the tops of the circles and blue lines. Drill starts when the coach shoots puck across the ice. First two players in each line sprint to puck and battle to gain possession. The third and fourth players in each line skate behind nets and become defensive players, ready to receive a pass from O1. Once possession is gained (O1), offensive players (O1, O2) can either attack the opposing net or kick the puck back to their two players behind their net (OD1, OD2). If OD1 receives the puck, he or she can immediately attack open ice or pass D-to-D. Both ODs activate regardless and the four offensive players then attack 4v2 vs. the two Xs. Puck possession is important. Once the puck is shot wide, or if the goalie freezes the puck or the defending Xs intercept the puck, then the two ODs return back behind their defending net and the Xs activate and attack.

Drill should run in 30-second shifts. Four new players activate from each line on each whistle. Be sure to create a puck race to begin the drill.

Coaching Points: This is live action. Teach puck-battle skills and prompt the offensive player to survey the opportunity to score or activate the players behind the net. Encourage behind-the-net players to head-man the puck appropriately, but also to attack the open ice with their feet and puck. This will influence the two defenders and open passing lanes for the other offensive options.

Progression: Behind-the-net players must pass D-to-D. They retrieve all wide shots and attack the game with speed. O teammates should regroup low (possibly even behind the net) while X1 and X2 must stay in the neutral zone. 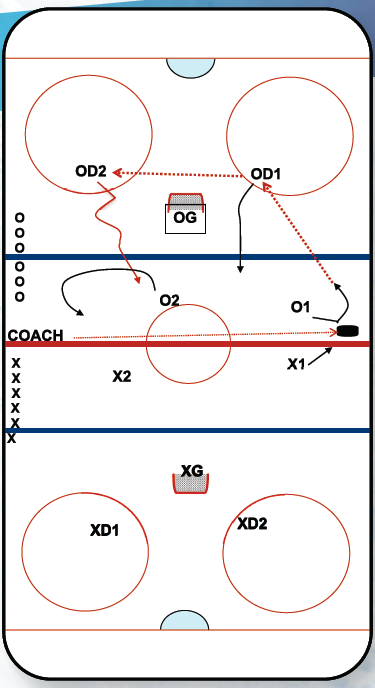