Purpose: To encourage quick puck movement, spreading out (proper spacing) and goal-scoring. This drill teaches players how to play with a man-advantage and maintain a numerical advantage with puck possession and passing. It also emphasizes transition from offense to defense on one-sixth of the ice. The drill starts with players playing 2v2. Once puck possession is won (F1 in this example), the game turns into a 4v2. F2 players must stay inside their square. F1 players must move or spread out in order to create passing lanes for their teammates in the squares. When X1 steals the puck, the play transitions to the opposite end for a new 4v2.

Equipment Needed: Nets, pucks and an ice marker to draw the squares.

Comments: This is a great drill to create hockey sense and encourage playmaking. Watch the players without the puck to ensure that they are getting open and creating good passing lanes for the players in the square. You can also watch the defensive side of the puck and coach good stick habits and penalty-kill skills. 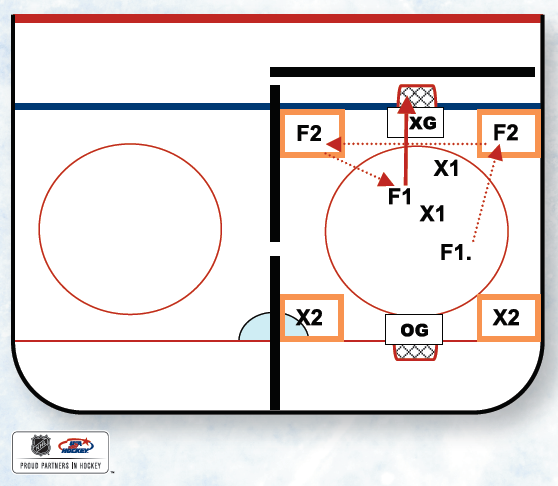