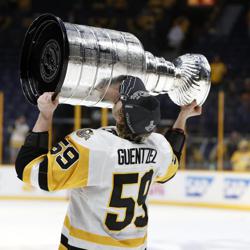 “Sorry kid, the NHL isn’t happening for a guy your size.”

He heard them playing youth hockey in Woodbury, Minnesota, and at Hill-Murray High School, and at Sioux City in the USHL and at the University of Nebraska Omaha.

But instead of discouraging him, those comments motivated Guentzel.

“Growing up, you hear a lot of people say that you’re too small, you’re too weak. I think it only made me want it even more,” Guentzel said. “It makes you want to prove those people wrong, because you have to be confident in yourself and your game. You have to rely on and stick to your game and use your speed and your mind.

“Sure, I was small growing up, but you have to stay with it and trust yourself. Being one of the smaller guys on the ice isn’t going to keep you from achieving some big things.”

With the size of his Stanley Cup teammates averaging 6-foot-2 and 202 pounds, Guentzel was playing alongside both big names and big bodies. At 5-foot-11, 180 pounds, he knows a thing or two about facing bigger competition.

Here are his five keys for smaller players.

Tune out any negative comments about size. Don’t step on to the ice thinking and believing that you’re going to be one of the smallest players out there, Guentzel said. Go out there and play to your strengths. Prove them wrong.

“You have to realize that you’re the only one standing in your own way sometimes,” Guentzel said. “Hang in there and play your game.”

Seeing a big body barreling down on you in the corners and near the boards can be intimidating, but it doesn’t have to be.

Keep your head up, feet moving and a low center of gravity. Do not turn away toward the boards. Prepare yourself for contact, protect the puck and keep the wheels moving.

“You realize pretty quickly at a young age that you’re going to take some pretty heavy hits,” Guentzel said. “It’s just a part of the game. But you can help yourself by staying involved with the puck and protecting yourself. Be aware of a hit coming and know your surroundings.”

At 14U/16U, it’s time to ramp up strength training. While kids cannot control their height, they can put an emphasis on off-ice training and make a commitment to getting stronger, faster and more explosive. By choosing the college hockey route, Guentzel was able to spend a lot more time in the weight room building his body for the next levels.

Kids at this age do not need to play more games. They need to spend more time training on and off the ice instead.

Excel in areas you’re good at

Smaller players, with less body mass, tend to have better agility and a greater knack for speed.

“I think a lot of smaller guys are usually the fastest,” Guentzel said. “If you’re a fast and mobile player, you can get in and out of areas a lot easier than some of those bigger guys. Speed is a big part of the game, so it’s obviously something you want to work on every summer and try to get better at that.”

Guentzel embraced his speed early on in his career. He remembers scoring a game-winning goal on an end-to-end rush to lift his team to a 10U victory. His speed and quickness was on display in the NHL last season, too.

“I knew I could use my speed pretty early on, when I was maybe 8 or 9,” Guentzel said. “I just kept working on that part of my game and worked toward making that the best it could be.

“You’ll see a lot of smaller guys in the NHL are also some of the fastest. It’s one of our greatest tools, and the bigger guys wish they had it.”

Penguins coach Mike Sullivan, college coach Dean Blais and a slew of other hockey coaches and scouts have said that it’s Guentzel’s hockey IQ that really sets him apart from the rest.

Watch your favorite players intently when you catch a game on TV or in person.

“A player that can see the ice and see the play is one that is going to be successful no matter what,” Guentzel said. “Watch a lot of games. Watch specific players and see what they do and take it and apply it to your game. Think ahead of what your partner and linemates are going to do.”

Simply put, Guentzel never quit. Behind the scenes, there was a lot of work and determination. That work and commitment never stops.

“When you’re small, you have that competitive edge that you want to be bigger and better than everyone else,” Guentzel said. “I think that’s what led me to what’s happening in my career now. You just try and get that edge. If a bigger guy pushes you down, you get back up and do it again and again. You win the battle in front of you and never give up.”

Making a Positive Impact as a 10U Parent

12U: Respect, Character & Being a Good Teammate

Respect can be built through hockey – particularly at the 12U level