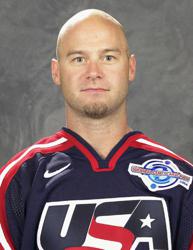 Bryan Smolinski suited up for Team USA in the IIHF World Junior Championship, the World Cup of Hockey (twice) and the IIHF Men’s World Championship (twice). Now he’s playing a new role in American hockey as part of a collaborative initiative designed to introduce more children to the game in markets throughout the United States.

Smolinski and fellow NHL alumni descended on the Kettler Iceplex in Arlington, Virginia, this week to set a solid foundation for Learn to Play, an second-year initiative funded by the NHL/NHLPA's Industry Growth Fund. Several representatives from USA Hockey presented during the event, as did Dan Jablonic, hockey director for the Washington Little Caps, a USA Hockey Model Association.

The gathering provided an opportunity for Smolinski and his peers to unify on the mission particulars and get primed for the coming season.

"Their support to help grow youth hockey in the U.S. is terrific and we're excited about it," said Kevin McLaughlin, USA Hockey's senior director, hockey development. "The seminar gave us a great opportunity to educate NHL alumni who will be involved in the learn-to-play initiative."

Stretching across the country, the learn-to-play logistics vary by city, but the goal doesn't.

“Every market is different, but we all have the same questions, so this event was mostly just about education and letting everyone know that support is available,” said Smolinski, who played youth hockey with Little Caesars in suburban Detroit before starring at Michigan State University and amassing more than 650 points in the NHL.

Smolinski will help lead learn-to-play efforts for eight U.S.-based NHL teams this season while also serving as a Little Caesars 14U coach. With a growing grasp on coaching kids, he has a clear long-term aspiration for the learn-to-play program.

“Success will be leaving a legacy as players of giving back to kids and inspiring them at the grassroots level through this initiative,” he said.

“The value that USA Hockey provides is significant,” said Smolinski. “The ADM works, and if we can piggyback on it, the NHL Learn-to-Play program will be a success.”

Professionalization vs. Development at 10U

Set up players of varying skill levels for future success

5 Qualities of a Good 8U Hockey Program

12U: Ramping Up for the Hockey Season

Returning to the ice should involve a gradual increase in both acute and chronic workload.