Work on passing and vision with this age-specific drill

Purpose: To develop passing skills, including the ability to receive the puck on the backhand and move laterally with the puck while moving the hands across the body to deliver a forehand pass.

Coaching Points: Start drill with a RIGHT-shot player and LEFT-shot player facing each other behind two dividers. Players should work together and move in opposite direction of each other. In this example, Player O has the puck and moves to his/her left (their forehand side). Player X moves to his/her left (their backhand side). Player X gives Player O a good target. Player O passes the puck to Player X. Player X corrals puck on backhand, and in one motion, moves to the right while moving the puck across his/her body. Drill continues as player X reports to the right side of his/her divider to deliver a forehand pass to Player O on his/her backhand at the right side of his/her divider. Repeat as many times as desired.

Equipment: Two dividers and a puck.

Progression: Mix the hand of the passers to encourage backhand passes. 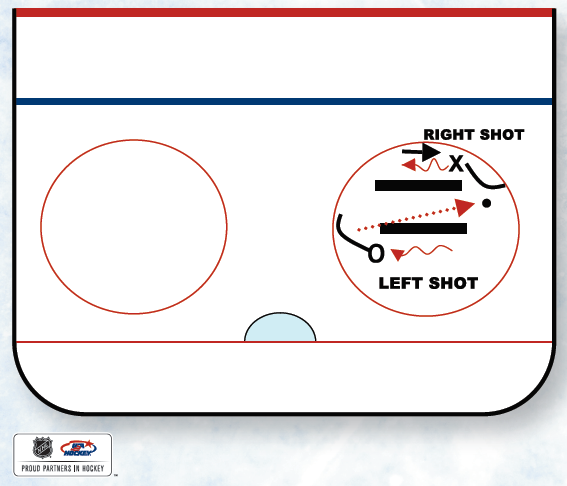