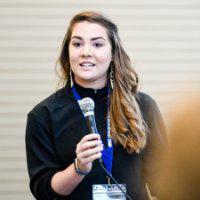 USA Hockey’s summer camps are designed for development, and as a select group of 14-year-olds discovered this week, that extends beyond mere skating, shooting, passing and puck-stopping. Mental skills also matter, which is why Dr. Jaime Sawchuk joined the teaching staff in Colorado Springs at the 2018 Western Regional High Performance Camp.

An Alaska-based sports psychologist, Sawchuk worked with the 200 camp attendees on effective goal-setting and techniques for maintaining a high-performance mindset. She also erased the stigma sometimes associated with seeking a psychologist’s help.

“Some people think, ‘Oh, there must be something wrong with me; A psychologist is here,’” said Sawchuk. “So I've really taken the time to explain that sports psychs are just here to help improve your overall performance, whether that's through teaching different mental skills, being an advocate or simply providing a listening ear. It's not a bad thing.”

For most 14-year-olds, the idea of working with a sports psychologist is foreign. But it’s actually an ideal age to set a firm mental skills foundation. With puberty underway, emotions running high and increased pressure to perform weighing heavier, there’s no better time to learn techniques they can use to manage the newfound challenges of life and sport.

“It’s very hard for them to understand that sports psychology applies to them right now, because they’re so young and they don’t think they need to apply any of these concepts until later in their careers,” said Sawchuk. “And what they don’t yet realize is that you can physically practice and practice and practice, but if you truly want to take your game to the next level, you’re going to focus on the mental skills like visualization, goal-setting, pushing yourself to the limit to achieve something and the ability to manage anxiety. It’s huge.”

For many of these young players, this camp is their first experience with a heavily-scouted event against high-level competition. The potential pitfalls are numerous, and many of them are rooted in misguided or imprecise goal-setting.

“Some of them, when I asked, ‘What’s your goal this week,’ they said, ‘I want to be seen by the scouts,’” said Sawchuk. “And I’d tell them, the scouts are here. They’ve seen you. How can you stand out? What can you do? They just want to be seen and they think that means every aspect of their game has to be perfect, but that’s not true. And if players were to focus on one thing that could make them stand out, they're more likely to be scouted.”

Steering players away from vague, unrealistic foci on things mostly beyond their control was Sawchuk’s first order of business. She then helped the campers create SMART goals (specific, measurable, attainable, relevant, timely) and she encouraged them to pursue those goals with intent. Throughout the camp, Sawchuk has checked in with the players individually to help them assess their progress and make adjustments if necessary.

“The ability to effectively set goals increases motivation, confidence, and ultimately, it increases overall performance,” said Sawchuk. “Plus, it’s applicable across a lot of areas in life, so teaching them the techniques and habit of setting goals – season goals, game goals, practice goals – is important. Then the next step is following through with doing what it takes to pursue those goals. After that, it’s about evaluating themselves. And that can be difficult, because it’s hard for 14-year-olds to be honest with themselves about their playing level.”

Still, Sawchuk was impressed with the players’ overall level of self-awareness. It’s a valuable tool in the mental skills toolbox. Adding a few more tools to that collection was Sawchuk’s mission, and she was happy to help.

“It's nice that USA Hockey is advocating for mental health and this concept of a sport psych,” she said. “A lot of non-athletes think that athletes have it made and they're doing what they love and there's no mental health problems, but athletes experience a lot of anxiety. There's depression when they retire. There are plenty of mental health challenges along the way, so we’re really hoping to get through to these kids and say, ‘Hey, it's okay to ask for help. There's nothing wrong with that. We all feel anxious. We all have those pregame jitters. It’s okay to come in and seek help.’”