Purpose: To compete 2v2 and compete defensively to steal pucks, defend and make good outlet passes. This drill does a great job of changing the “hockey role” of the players, since they must act and think quickly as they change roles from offense to defense. This drill also activates the offensive mind and feet with a quick scissor play behind the net.

Drill Structure: To start the drill, coach designates the offensive team (both Red1 players in this example) and that team begins with the puck. Two Gold1 players are on defense. If Red scores, Red gets the puck back and can attack again, make-it-take-it style. If Gold1 steals or gains possession of the puck, they must pass it back to Gold2 players. Both Gold1 players are then done with the drill and return to their line. Immediately, the Gold2 players perform a scissor (interchange) behind the net and attack Red1 players who are now defending. Drill repeats. Now Red1 players attempt to gain puck possession and activate Red2 players.

Rotation: Offense, Defense, Out. Players in line start behind the net.

Equipment: Two nets and a puck. 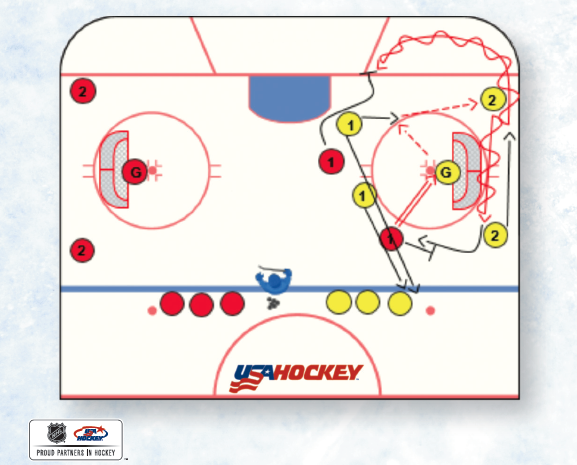