Purpose: To create a super competitive environment that encourages good faceoff technique and winning faceoffs as a team instead of expecting the centers to win draws by themselves. This game teaches a line-of-scrimmage mentality.

Structure: The game begins with six players lined up as shown in the illustration. Play starts when the coach drops a puck between the X1 and F1 centers. This game creates an opportunity for coaches to teach good faceoff techniques, both in terms of centers winning the draw and also wingers crashing to help.

Object: The object of the game is for all players to win/battle for puck possession. Coaches should encourage the players outside the circles on the hash marks to be in a ready position and anticipate the puck drop. Once the puck is dropped, outside players must aggressively crash the dot and battle for a loose puck.

When possession is secured (Team F in this example), both the losing- team wingers (Team X in this example) must immediately leave the game by sprinting out of the playing area (however, the X center stays in the game). This creates a 3v1 for the faceoff-winning team. The winning team is rewarded with the opportunity to go on the offensive and quickly attack the opposing net 3v1. This should happen very quickly, and after a goal or save on either net, players should return to the faceoff circle and line up quickly for another faceoff to get as many reps as possible. Rotate players as you see fit. 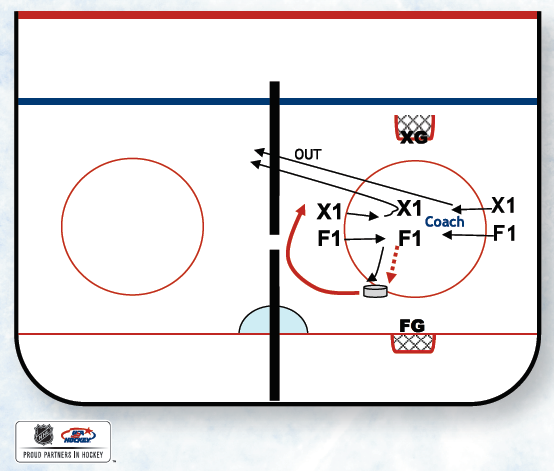