Purpose: This small-area game develops numerous offensive and defensive skills in a fun, fast-paced and competitive playing environment. It can incorporate as many as 10 players simultaneously, though eight is ideal. The primary offensive skills trained in the game include saucer passing, stickhandling, quick skating changes of direction and deception to get open for a return pass, puck protection, shooting accuracy and a quick release. Defensively, the game teaches anticipation, positioning, denying passing lanes, stick-on-stick play and quick transition to attack.

Drill Structure: Lay a firehose over any faceoff circle. Place two goals on opposite sides of the circle. Specialized skill goals are ideal, but any goals will suffice. Two players enter the circle. Up to eight additional players are positioned around the outside of the circle. Coach designates which inside player will begin with the puck (dark gray in this example). Play commences 1v1 inside the circle. O (dark gray) must complete a saucer pass to an outside player and then catch a return saucer pass before attempting a shot on goal. Defending player (light blue in this example) tries to steal the puck, either by taking it from O or intercepting a pass. If D (light blue) gets the puck, D becomes the attacking player and must complete a saucer pass and receive one before shooting. Keep score. The 1v1 can continue for a duration of time, e.g., 15 or 30 seconds, or until one of the players scores three goals. Allow inside players to shoot on either goal, which forces the defender to play aggressively and hound the puck.

Coaching Points: This is a high-intensity drill, so keep the shift lengths relatively short. The desired outcome is for players to compete hard 1v1 and execute skilled passes, so when it gets sloppy, it’s time to cycle in a different 1v1 duo. Emphasize good saucer passing technique and moving quickly to get open for the return pass. Also emphasize puck-protection techniques and quick, accurate shot releases. Defensively, emphasize good body and stick positioning to deny passing lanes, along with relentless pressure on the puck and quick transition after a turnover.

Equipment: A firehose (or something that forces saucer passes), pucks, two goals (skill goals encourage accurate shooting, but any goals will suffice). 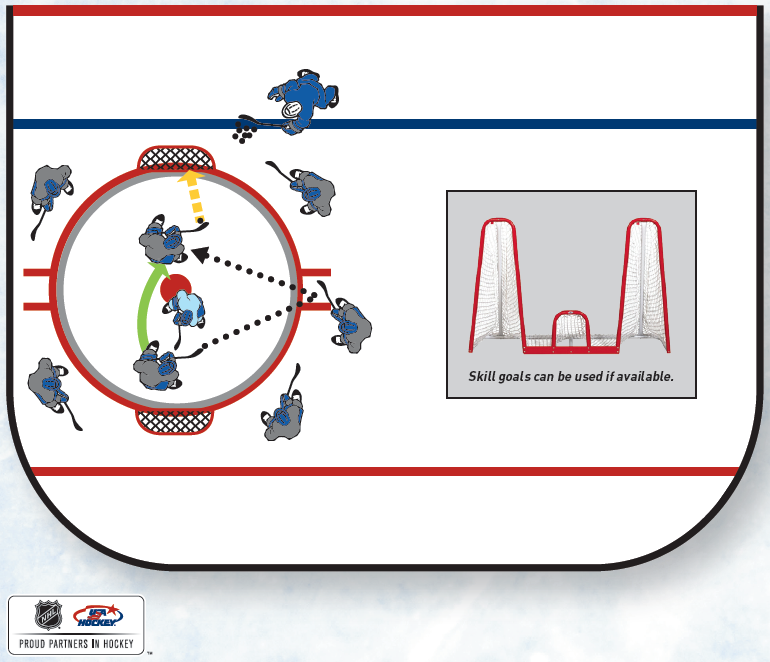