Ten years ago today, the USA Hockey board of directors unanimously approved the launch of a new paradigm in youth athlete development: the American Development Model.

The decision created a better way to play for American youth, dramatically improving the hockey development environment in the United States. The NHL became an early champion of the ADM, throwing its support behind the initiative. The ADM has since spread across the nation’s entire sporting landscape, as it was subsequently adopted by numerous national governing bodies, local youth sport clubs and the U.S Olympic Committee.

Over the ensuing decade, the ADM has become the world-leading standard for hockey development, beginning with players’ first strides and carrying them through high school, junior, college and professional hockey. Since its approval:

“It was a revolutionary concept at the time, but approving the ADM has done great things for American hockey and American youth sports as a whole,” said Pat Kelleher, executive director of USA Hockey. “It brought more children into the game, and just as importantly, it kept them in the game because ADM programming is more fun, more engaging and more efficient from a skill development standpoint.

“As we look back at 10 years of the ADM, it’s undeniable that the nation’s overall talent pool has improved, and that the U.S. is better positioned as a hockey-playing nation than ever before. And at the grassroots level, the ADM continues to deliver on its promise of helping every player pursue his or her full potential.” 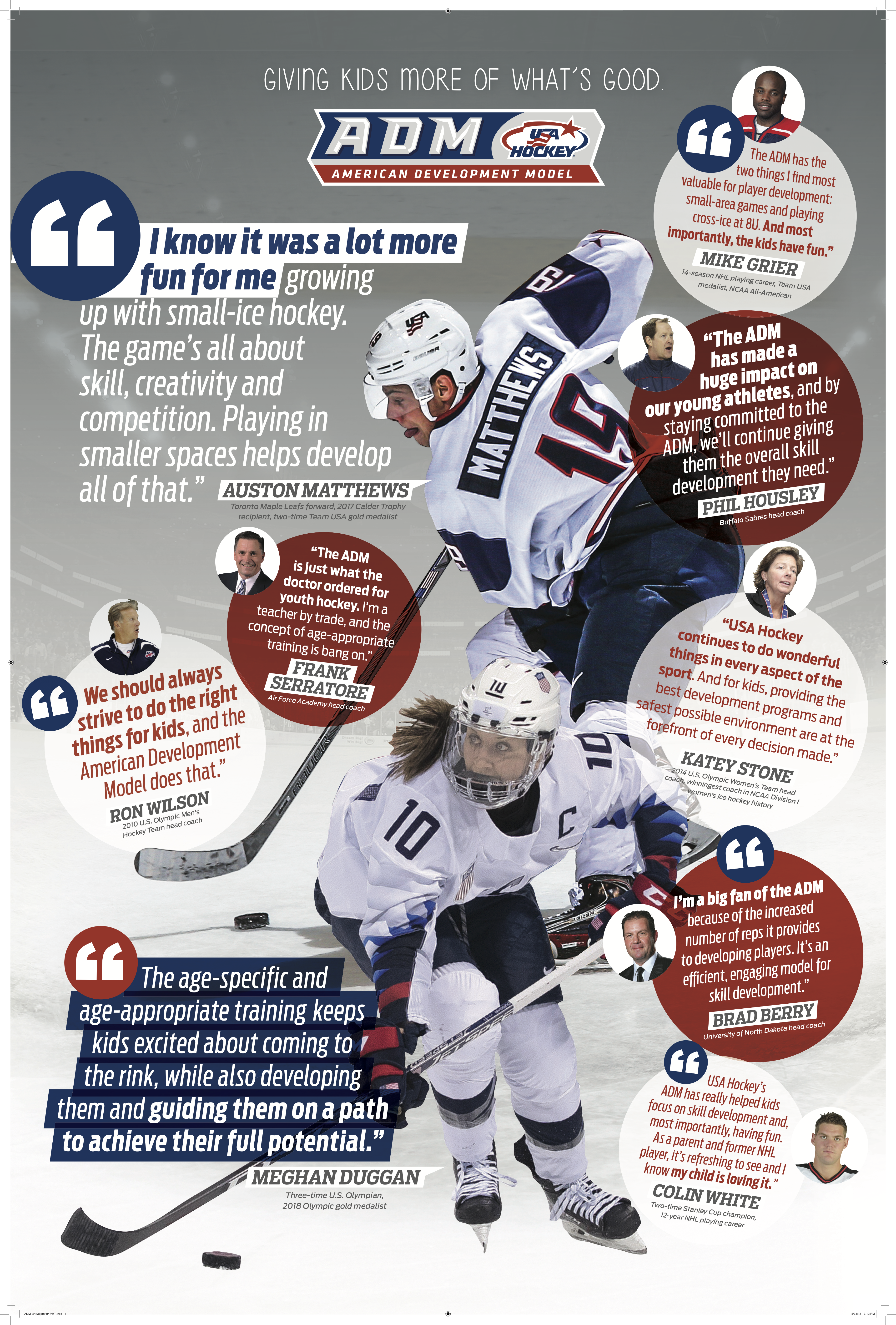 USA Hockey ADM principles have also contributed to success on the international stage. Since 2016:

“At its core, the ADM is about doing what’s best for kids,” said Kevin McLaughlin, assistant executive director of hockey development for USA Hockey. “And in the decade since it began, we’ve been able to do exactly that, thanks in large part to the commitment of our coaches and parents nationwide, who recognized that change could be good. They embraced it, as did the NHL, the NCAA, the USOC and now many other youth sport organizations.”

“We wanted to give kids more of what’s good, both in terms of their individual skill development and also in their overall athletic experience,” said Ken Martel, technical director of USA Hockey’s ADM. “With that in mind, we built the ADM with a blend of decades-old hockey wisdom, advanced new ideas, emerging sport science and the best childhood development principles.”

USA Hockey will commemorate and celebrate the 10th anniversary of its ADM throughout the 2019-20 hockey season.