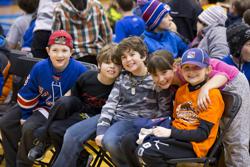 Every day we hear parents and coaches share their ADM success stories. We've gathered some of that commentary and encourage you to share your story as well. Fill out the form linked below to tell us how ADM hockey in your region has helped your child soar.

My Story: As 8U Director for the Rye (NY) Rangers for many years, I embraced the ADM model when it first appeared in the 2008-09 season. I saw the benefits of having our 50 or so Mites on the ice at the same time working on different skills in an efficient manner. Since that first season our program's membership in the Mite division has grown to over 140 players spread among four groups. Each group closely follows the ADM model and philosophy. We have seen tremendous growth and development in our player's overall skill set. The practice plans for 6U and 8U expertly balance hard work and fun games and every kid comes off the ice after practice with a big smile on their face. The parents, most of whom never played hockey, love what they see and the improvements in their players. I have had many parents approach me asking how this type of station-based training can cross over to their child's other sports. I firmly believe the ADM model is an outstanding resource in the training and development of these young athletes. This past season, most of our SQ, PW and Bantam teams had very successful seasons with kids whose skill level is greater than kids before them. More and more kids are picking up the game of hockey because, as one parent told me, we are now providing the best athletic experience of his child's life so far. Thank you USA Hockey.

My Story: Just wanted to share something with you. Our 2005 group has been running a program very consistent with the ADM principles up here in Canada. We have largely used the practice plans since they were five years old. ... Our enrollment is up, expenses down and skill and fun through the roof. Folks not buying into this program are really missing the boat.

My Story: As a result of ADM, the skill development I have seen in kids is off the charts.

All for the PRIDE Cup

My Story: Our ADM hockey practice is much more then an hour of ice time. For the kids, it is a place where friendships are made between people who do not necessarily live in the same town but share the same interests. The kids learn quickly to bond with others who may not just go to their SCHOOL. The practice keeps them on their toes trying to get them to do things out of their comfort zone. They are constantly being challenged in fun ways so they do not necessarily view it as a sport specific skill, but more as games on the ice. The ice is buzzing with anywhere between 35-50 skaters at a time.

Our Hockey Director keeps a Trophy Cup called the PRIDE award, given to the hardest worker each week. The winner takes the large cup home for the week. We have had this cup for the past three seasons. We have one for each age group and they are starting to wear, but it is still a wanted commodity, some kids have won the cup numerous times and some are still trying to win it. At the end of practice the winner is celebrated by a large continuous stick slap from their teammates while they exit off the ice. This is where the great stories start, this cup is revered as if it were Lord Stanley, some bring it to school, for show and tell, some sleep with it, it goes on mantels above the fireplace, on Facebook and Instagram photos, and some have even ate their Cheerios out of it!

Development And Then Some

My Story: Our organization now runs three ADM station-based practices a week. ... With the addition of ADM practices we've been able to add more ice time without added costs. While our main goal is to develop the kids, we have found these practices help our coaches as well. Our ADM practice plans are put together by our most experienced coaches who then teach our other coaches new drills and how to develop practice plans. It also gives the kids the opportunity to be coached by more than just their team's coach. The ADM practices have also given us the opportunity to invite new players to our organization by offering just these skill-developing sessions when they may not be ready to commit or participate on a travel team.

My ADM Story: We became a USAH Model Association this season. The leadership of our organization believed deeply in the principles and philosophy of the ADM and we felt once we understood what was truly the optimal way to develop hockey players and give them the best experience, we couldn't live with knowingly not delivering that program to our families and players in their best interests. ... While our core leadership group were all believers in the program, we were not prepared for the rapid and powerful results we would see within the first year of implementation!

That was special and cared about what was best for the kids and their development instead of our own egos of winning games and championships. Thank you, thank you, thank you USAH for the ADM program. I know personally that it has impacted and changed the course of many lives simply within our association, including my own and my families.

Soccer on Ice a Hit

My Story: My kids love seeing the soccer ball. And love playing tag. I put out obstacles on the ice for them to hide behind. Tires, cones, nets, etc. The smiles and screams as I'm chasing them makes me and their parents laugh almost as hard as the kids.

My Story: During the past four years, I’ve dissected all of the information provided by USA Hockey and I’ve seen first-hand how the ADM provides development of the overall skill set while also building players’ confidence thanks to the amount of puck touches and the freedom to be creative. In my opinion, what you’ve done with the ADM and girls/women’s hockey is truly special.

My Story: The last symposium that I attended was one of the best yet. Michele and the other facilitators were fantastic and continue to be great with the sharing of material etc. Thank you for setting up these symposiums at the reasonable cost that was set.

My Story: Another great year at our arena. Over 150 families participated in our 8U learn to play/ADM program. We continue to see growth of our players as well as tremendous support from our parents. On our end of the year surveys, the overall ADM program scored 4.6 out of 5!!! Thank you USA Hockey.

Fun For All Skills

My Story: One of the greatest moments for our coaching staff occurred in our most recent season when multiple players who most would consider the bottom handful of players from a skills perspective scored goals in their cross-ice games. Something that would not have occurred had we been playing full ice. ADM has enabled our association to decrease the gap between the best player and the least best player tremendously from our Winter to Spring Season.

Huge Impact on Us

My Story: As part of the Wildcats Hockey Club and becoming a model last September, none of us could have imagined how big of an impact it could make on a hockey community. The impact it has had on our organization and my life has been life changing. I would like to tell a story of a couple of my teams and the ADM last season. Last season I personally coached two Squirt teams. One team finished first in the standings and one team finished last in the standings. The beauty of it was that they did everything together. They practiced three days a week and did off-ice sessions together. We never said the one stronger group was too "elite" to practice with the less experienced. We broke down the barriers of level of play. Instead, we created a Squirt Program and put the focus on the practice and the development, not the wins and losses. This is just one story of many. Thank you.